I just returned from another fabulous trip to the Miraval Resort just outside of Tucson, Arizona.  I have been going annually for many years and typically go with a large group of friends -- both old and a few new -- and that is what makes the trip especially fun.

Miraval is all about mindfulness and living in the present moment.  Meditation, living with intention, etc.  Here is the wall hanging that is in each room -- just in case you need a reminder while changing for dinner. 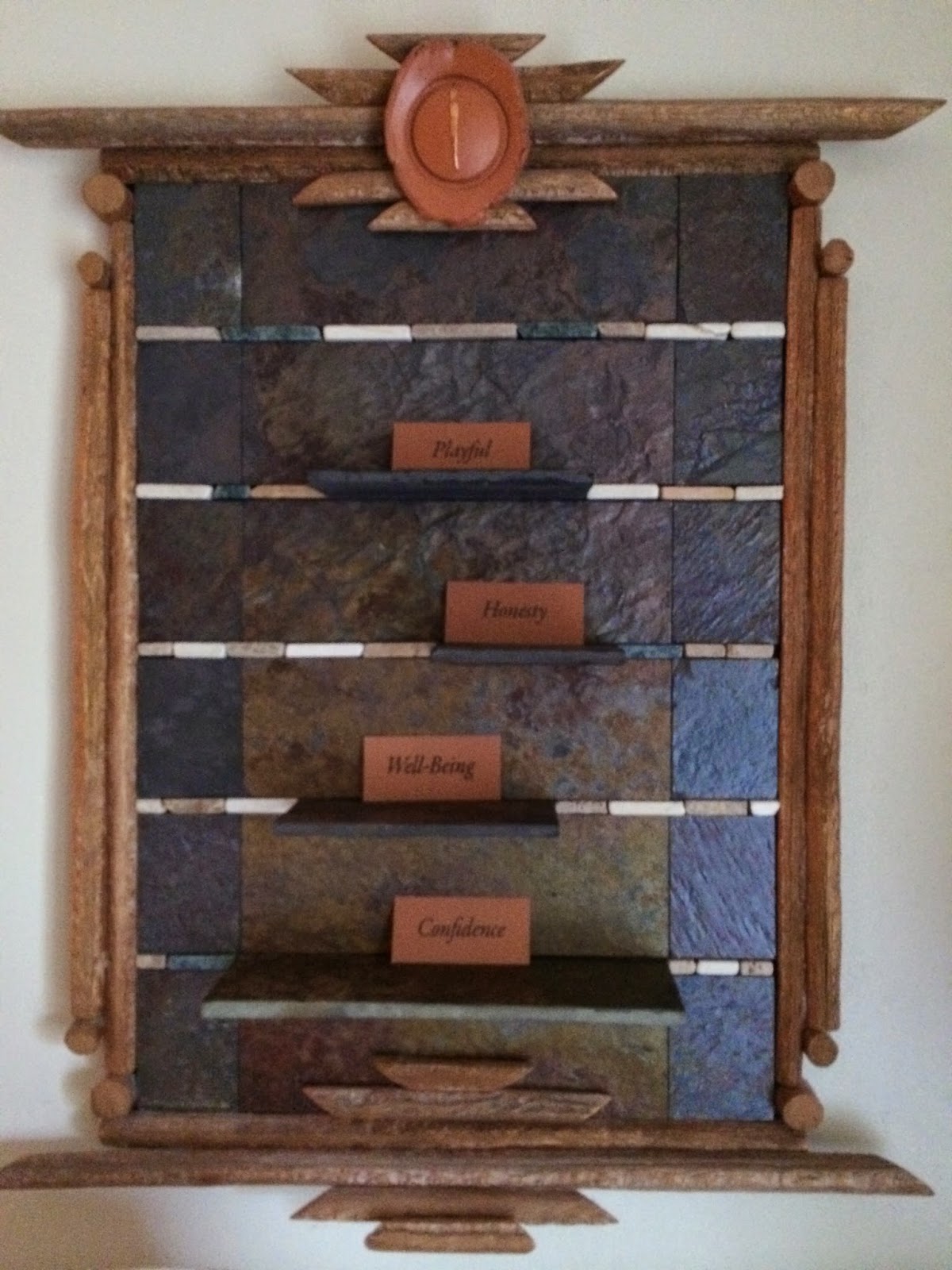 Those of you who know me well know that I am all over this stuff -- it's SO Oprah -- and I really find the time I spend there worth every penny.

NOTE:  Miraval ain't cheap, people.  Plus, they have really cute work-out clothes in their gift shop.

NOTE TO NOTE:  You may wonder why I need cute work-out clothes...  So do I, but damn if I don't always get myself some.

I always go to classes while I'm there to help me  -- on my <gag> journey and one of their experts told me that I need to keep writing (for a creative outlet), so I guess you won't be rid of this blog too soon.  Thanks for reading.

Here are the girls from this year's trip.  Most of us are no makeup, so reader beware. 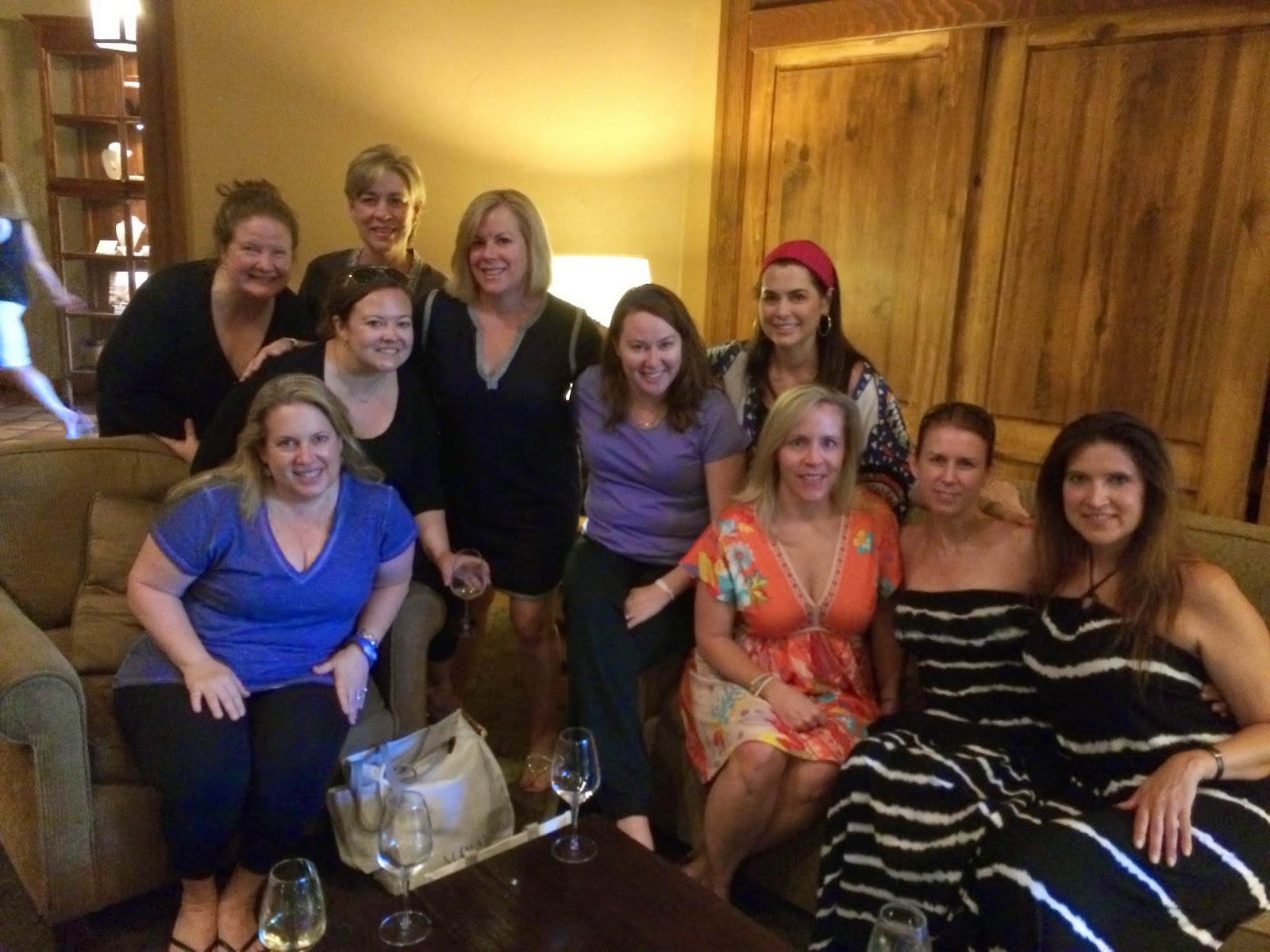 The other thing one of their experts told me is that I like to be in control.

Just that morning I had gone on the 2 hour hike and it almost killed me.  But the worst part was when we arrived at the "dry creek bed" that they had filled up with sand (BTW, I bet they trucked that sand in) and then told us that we should trudge (my word, not his) through the sand and then up the next hill or two in silence.  Lori and I rolled our eyes and took off.  Sand in my shoes and huffing and puffing up the trail, barely keeping from stumbling into cacti each step.  Finally I get to the top and the front people (who would push to go around us the whole time so Lori and I finally just walked together to hold them back -- controlling?) were standing there in silence.

NOTE:  No one was really going faster than anyone else -- they just wanted to look like they were going faster.  Bitches.

Anyway, here they all are standing around looking bored, so I made this announcement to all:

I would like to say, and I am unanimous in this, that I don't want to walk through anymore sand.

NOTE:  Ten points if you caught the Are You Being Served Mrs. Slocombe reference.

Of course, D'Andra and Angela were in total agreement with me and cracked up -- Lori too.  My friends know that I'm controlling.  I think they like me that way.

Posted by Paige McDaniel at 9:08 AM No comments:

I don't really keep count of what I ever write about on this blog, nor how often I do a favorites post, but it does seem to be monthly lately.

I think I just enjoy talking about things I like.  I think we all do.

Last year Joanna told the person who got me as their Secret Santa recipient at Community Partners of Dallas that I was easy because everyone already knows what I like (and don't like, but that's a different blog post altogether!).  My Secret Santa Lauren did a fantastic job, so there are some benefits to letting people know what you like, people.

As an aside to the ladies -- tell your husband what you want him to get you as a gift.  He just wants you to be happy -- don't make him guess!

NOTE:  I know you think that he should know what you want if he loves you.  He doesn't.  See italicized line above.

NOTE TO NOTE:  Yes, I know I've never been married, so why take advice from me?  Because I'm right.

On to the Four Faves -- if you missed the last one, visit it here:  http://blog.paigemcdaniel.org/2014/05/four-favorite-things-i-love-right-now.html
What are your four faves?
Posted by Paige McDaniel at 1:32 PM No comments: 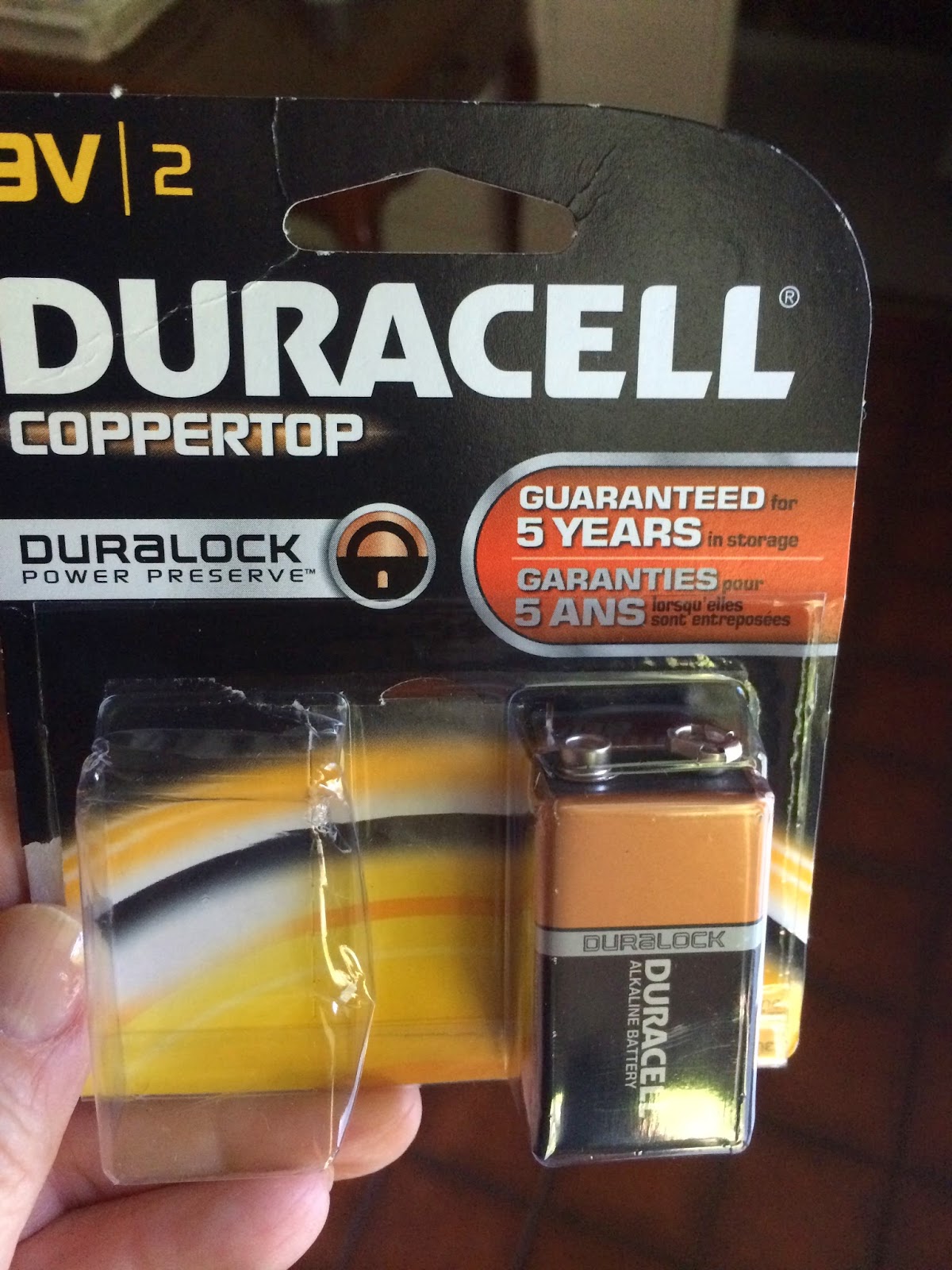 You may be wondering why this photo is leading off the blog this week.

Will someone please tell me why the smoke detector NEVER needs a new battery during the day?

Truly, I can only remember one time when that damn thing started chirping during the waking hours.  Last night was right back to the norm -- at 3:37 a.m. it chirped.

At first chirp I always assume it must be something else and roll over.  Then, about 10 minutes later (after you've gone back to sleep, of course), chirp.  Then for some reason, I ALWAYS think it is something downstairs.  Up, turn off the alarm, turn on the lights -- yikes -- go downstairs, check the fridge doors, the dishwasher, etc.; then back upstairs, turn on alarm, turn off lights, get in bed, then chirp.

Slow realization that it is the smoke detector, I know, but I'll be damned if I don't think that thing throws it's voice to befuddle me even more than I am already in the middle of the night.

So, repeat of the above, find battery -- at least I had a packet of them -- grab step stool, then up to replace battery, repeat steps again, but ain't no way I'm going back to sleep this time.

UGH.  Such a yucky night.

But Greg had a worse night than me last week.  The ten-year-old boy was being removed from his home for extreme neglect and while the caseworker was helping him to gather a few things to take with him, Greg's mother was shouting that she was glad they were taking him.  That she never wanted him anyway. That this was the best day of her life since this B_____ was taking him away to some awful foster home.

Greg was so upset when he arrived at the CPS office that he told his caseworker that he wanted to kill himself.

All I had to do was wake up early in a house full of love.

And find a battery.
Posted by Paige McDaniel at 10:18 AM No comments:

I don't have a plan of what to write about today for the blog.

I've had a busy day.
But for the past 30 minutes or so, I've just been sitting here trying to think of something to write about.  I think part of the reason is that yesterday and today, I've spent a lot of time brainstorming about a closing event for the Community Partners of Dallas 25th anniversary year.  Luckily, I've had board members and staff members to do it with me, so it's been fun, but I think it's taken a toll on me.

Luckily, tonight I am doing something super-fun...

The wonderful, beautiful, best selling author, and friend to CPD Emily Giffin is having a signing of her new book to benefit our Back-to-School Drive.  The One & Only is her latest offering and it is my favorite of all of her books.  It takes place in Dallas and the fictional town of Walker, Texas, and is full of romance, football, and fun -- and what is more Texas than that? 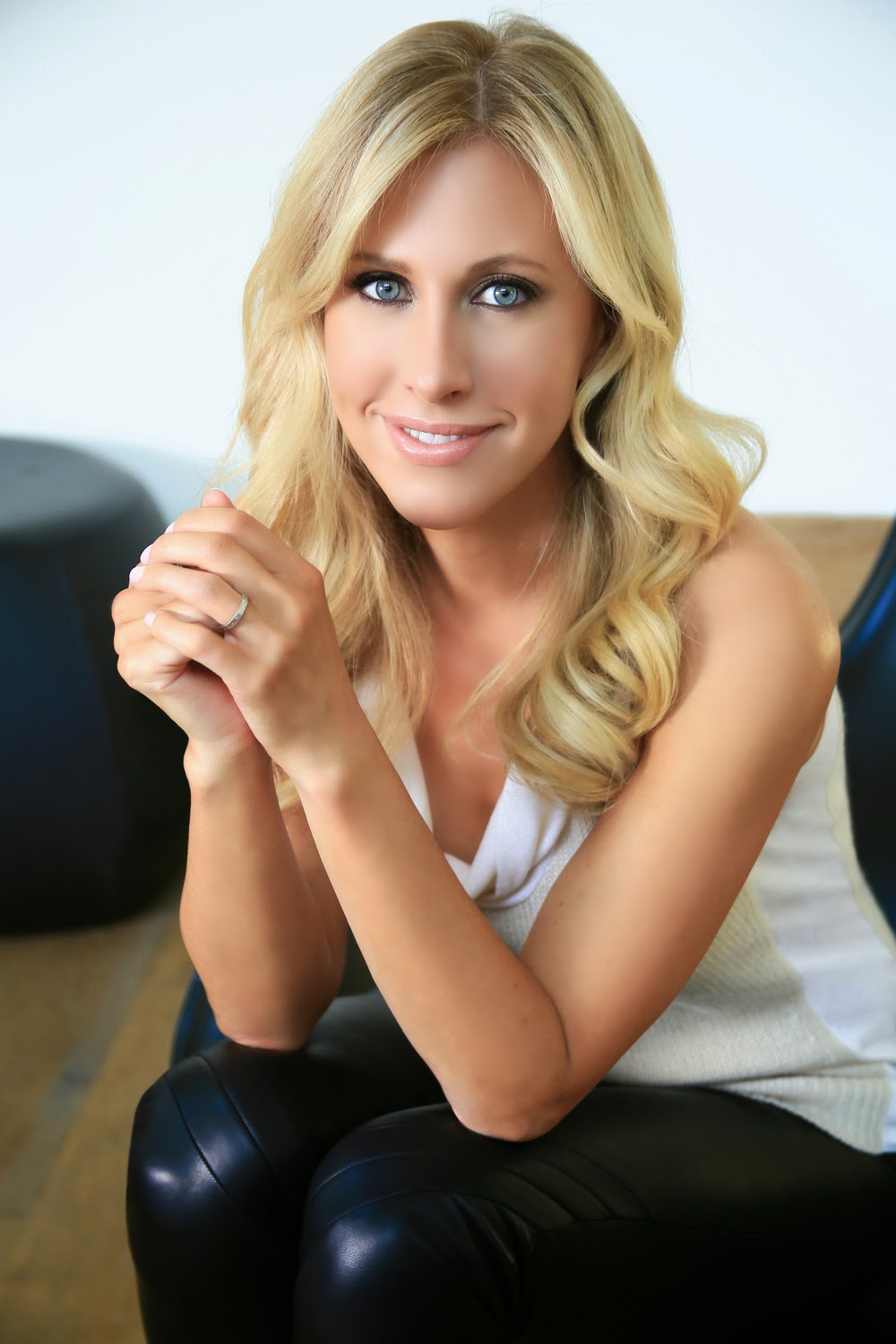 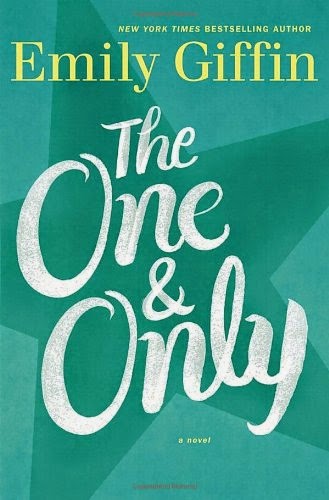 Emily is the best and we are so blessed to have her good friend (and mine) Sandy hosting the event for us at her home.

Buy The One & Only and be sure that you note the charity she mentions by name in the book...

I bet you already know which one it is.
Posted by Paige McDaniel at 1:57 PM No comments: