Some Kids Have Lived Nightmares

Halloween is one of my favorite holidays.  Those of you who know me well know that one of my mottos is (adapted from Steel Magnolias) "holiday decorating is what separates us from the animals," so Halloween is big at Paige's house.  I have tons of pumpkins, witches, and ghosts -- pretty much covering every surface in the den, dining room, and adorning the front yard.

Last night, one of Community Partners of Dallas' best donor and volunteer groups (the Northwood Woman's Club, aka NWC) hosted a Halloween party for the kids in our Heart Program.  The Heart Program provides group treatment for kids who have been sexually abused and for their non-offending family members.  The kids meet every Tuesday evening with therapists to talk about their abuse, their abusers, and their road to recovery.

Anyway, last night about a dozen lovely ladies from NWC and several of our staff members threw a fun party for these special kids.  A hot dog dinner, fingernail painting, temporary tattoos, cookie decorating and more made a fun night with kids and adults dressed in costumes.  Here's a photo of some of the hostesses with me: 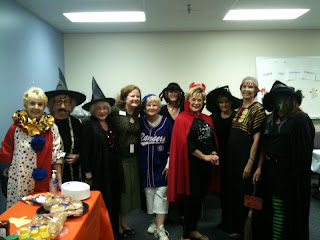 It is always so inspiring for me to be around these boys and girls (ranging in age from 6 to 16) who have lived lives that you and I can't imagine.  They have lived real nightmares.  They have faced real demons.  BUT, all they want is to be like all the other kids.  Truly, with help, they can get over the sexual abuse.  They can move on.

And attending a Halloween party is a first step.
Posted by Paige McDaniel at 10:57 AM 1 comment:

My Life as a Daughter

I hosted my mother's 75th birthday luncheon at my home today.  Even as I type, the first load of dishes is in the dishwasher and the napkins are in the washing machine.  Nine of her girlfriends were here to celebrate and it really was just a ball of fun.

My mother is simply amazing.  Her father died when she was young and she has run a ranching and oil & gas business since that time -- probably about 45 years -- back when a lot of women didn't do that kind of work.  She battled the old boy's network and won.  My father died when I was 5 years old and Mom made decisions that benefitted my brother and me immensely.  She made choices and sacrifices to keep my brother and me safe and secure.  And always with the same FABULOUS hairdo that she still sports today.

Contrast this with a story I heard yesterday from a caseworker about a mother who sexually abused her own daughter, then had the gall to post photos on the internet of her crime.  The details are so harrowing that I don't want to discuss them further.

I know that all of you reading this didn't have the greatest mom in the world.  Lots of us weren't that lucky.  But today, I'm just wishing that one little 18-month-old girl had had a Cindrette Ricker McDaniel.  And I'm glad that this 49-year-old girl did.
Posted by Paige McDaniel at 12:41 PM 6 comments:

I know that it is early October, but we are already well into Christmas here at Community Partners of Dallas.  Each year we do a Toy Drive for about 5,000 children who are involved with Child Protective Services.  CPS caseworkers find out what the children on their caseloads would like and we make wish cards (similar to the Salvation Army Angel Tree) and send them out into the world to be filled by donors.

The kids who you will be helping truly need some joy in their lives.  They have been battered and bruised and told by those who were supposed to love them that they are stupid and worthless.

The kids are not asking for the moon either.  Here are our most requested items (in no particular order):

You can make a child's dream come true, for as little as the cost of a barbie doll.  And yes, I know that I listed 12 toys, not 10 -- I was a theater major.
Posted by Paige McDaniel at 1:51 PM No comments:

I'm Still Mad at the Jerk on Hell's Kitchen.

Those of you who know me well know that I love reality TV.  I watch Project Runway, Top Chef, all the Real Housewives, Flipping Out, Jersey Shore, Little People Big World, The Apprentice, and more.  And yes, it is slightly embarrasing to admit that this is a short list of the shows that I watch.  It makes me think of Howard Stern's movie Private Parts, when the station management (who hated Howard's broadcasts) was talking to the ratings guy who was telling them the results of the listener survey that said something like listeners who loved Howard listened for an unheard of 68 minutes.  When asked why they listened so long, the listeners said that they "wanted to see what he would say next".  The ratings guy then revealed that the listeners who hated Howard listened for 90 minutes and their most common reason for listening was "I want to see what he's going to say next".

I both love and hate reality TV.  I enjoy the break from my real life to look into the produced and edited lives of others.

Russell, heretofore (and everafter) known as the Jerk, is one of the current "chef-testants" on Hell's Kitchen, hosted by Master Chef Gordon Ramsay on FOX.  The other night the gang of misfit chefs looking to work for Ramsay was tasked with throwing a Prom Party for kids from Beverly Hills High.  Of course, when the school was announced I had a twinge of "oh, I bet those kids will be bratty and demanding" and held my breath.

The teens weren't bratty.  They were perfectly nice (at least what was shown on the screen) and other than having more advanced palates than many of their peers, were normal teens.

What has kept me thinking about this show was the treatment that the teens endured from the Jerk.  He belittled them in words, actions, and eye rolls when he was asked to put up decorations.  He treated the teens with such disdain that the restaurant manager finally had to step in to remind the Jerk that these kids were CLIENTS.

I was graduated from Highland Park High School, so I will admit that maybe I am somewhat biased, but let me tell you about the teens I know who go to schools like HPHS, ESD, St. Marks, Greenhill, etc.  The teens who help us at Community Partners of Dallas from these schools may drive over here in a Lexus or Mercedes, but they are kind and generous and really care about helping others.  These teens will spend hours and hours on the floor in our warehouse counting school supplies or sweeping the floor.  One of our THANKs (CPD's teen board) members has volunteered more than 700 hours with us to help abused and neglected children in our community.

The teens I know are super kids and are very deserving of respect.

You better give it to them, because they'll run this world one day.  I think it will be a better world.
Posted by Paige McDaniel at 9:27 AM No comments:

At Community Partners of Dallas (CPD) we help kids every day.  Today, this request really hit me:
A CPS caseworker wrote up a request for CPD to provide a birth certificate for a child who was dropped off at the hospital by an unidentified male about 30 minutes after the child was born.  The request listed him as “Baby Boy Unknown”.  The unidentified male stated that the mother had 6 children at home and did not want this baby.  The male refused to bring the baby into the hospital and made the hospital staff come and get the infant from a van parked outside.  “Baby Boy Unknown” was wrapped in bloody sheets and still had his placenta and umbilical cord attached.
I am thrilled that this baby was turned over to professionals at the hospital.  I am thrilled that the mother and the van driver knew how to give up the baby safely.  I am thrilled CPD has donors and that we were able to help this child with the birth certificate, clothing, diapers, and more.
“Baby Boy Unknown” is now safe in a foster home and is no longer unknown.  He is Sam.
Posted by Paige McDaniel at 1:49 PM No comments: