I’m getting kinda nervous.
See, I’m going to a Karaoke party for a charity on Friday night and I told the 2 fabulous chairs and everyone at my office and my family and the friend who is taking me as his guest and really now that I am telling you guys…
Well, let’s just say that I told A LOT of people that I would sing Friday night.
So that’s why I’m nervous.
Now, I can sing – I was a theatre major in college (notice I even used the fancy spelling of theatre, like I did back then when I wanted to be in the THEATRE and project to the balcony).  My parents would tell you that they paid a lot of good money for me to be able to sing on stage.  But even though I can do it, it’s been a long time and I’m still a little nervous.
The older that I get, the less I want to try something new.  I know what I’m good at and what I’m not.  I just no longer attempt things that I’m not good at.  I don’t have to disappoint myself or anyone else.  I don’t have to get nervous.  And I don’t have to learn anything new.  Life is easy.  But how boring is that?
What if that was what we told kids?  What if we told the children we work with at Community Partners of Dallas that they should just follow the patterns of violence that they already know too well?  What if we told them that their lives were never going to change – that adults will always use and abuse them, that they will never have a wish fulfilled in life, that they will never have a better life?  That they are victims and that they will be victims for the rest of their lives?
No, we don’t tell the kids that because we truly believe that they can change the cycle.  I’ll sing for them on Friday.
But I’m still a little nervous.
Posted by Paige McDaniel at 1:38 PM 1 comment:

Why We Love Dallas.

We had our first board meeting of the year at Community Partners of Dallas today.  We had a room of about 30 board and staff members there and believe me, they are a powerful group.  Board members come to us through a variety of ways:  the Junior League of Dallas (LOVE the JLD!), the business world, volunteer service, through friends, and many other ways.
Since this was our first meeting of the year and we had a few new board members in the room, we took the opportunity to go around the room and have each board member tell what his or her favorite thing is about Dallas, as well as their favorite thing about our agency.  I just LOVED the answers we got, especially when they talked about the agency and remarked on the beauty of the staff members (Yes, some of them actually said that – Gold Stars for them!).
But I really enjoyed discussing the best things about Dallas.  Several people loved how Dallas really has become a great city for the arts.  Some mentioned loving all of the great choices for restaurants in Big D – S&D Oyster Company and Bob’s Chop House were especially noted.  Several said that they loved how easy it was to get around in Dallas and we were all happy to have a Target Store nearby our homes.  One person said that she loved her nice neighbors; another that we live in a city where we feel pretty safe.  Others noted the generosity of our city and how we enjoy such a variety of activity options for all ages.  Many said that they loved our weather (except the ice).
However, one board member’s comment really hit home with me.  She said that her favorite thing about Dallas was her friends.
Isn’t that what makes life on earth bearable?  A friend to help you when you need help.  A friend who brings you a valentine.  A friend who calls you when you’re low.  A friend who makes you laugh.
A friend who reminds you that you live in a great city and work for a great agency.  Thanks, Leslie.
Posted by Paige McDaniel at 1:40 PM 1 comment:

Tips from Roger Horchow on Connecting with People

I was lucky enough to hear Roger Horchow speak yesterday at a lunch for the United Way.  He is 83 years old and if you don’t know who he is, Google him – he is simply amazing.  Throughout his life, he has met and worked with some of the most famous people in the world:  Nancy & Ronald Reagan, Diane Von Furstenberg, Barbara Walters, Carol Channing, Stanley Marcus, and many, many more.  Roger and his late wife were often seated at dinner tables with the world’s most interesting people.
It really was a great speech, but the “Aha” moment for me was Roger’s fab advice to always continue to make connections with people.  Follow up later when you meet someone.  Send them a handwritten note.  If they invite you to come by the next time you’re in Kalamazoo, call them up before you arrive and tell them you’re coming to town and would love to see them.
Now, you know that this advice isn’t a new revelation for me – I am a gal from Texas and my mother “raised me right” – I know that I need to do this, and I do it.  Believe me, when you raise money for a living, you have to do it!  But what I loved about hearing it from Roger was that he showed us how the connections he made with people helped make him into a successful business leader, a successful person, and someone who we would all love to sit across from at our next dinner party.
I’m available whenever you call, Roger. 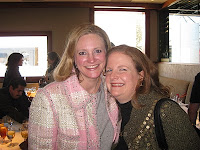 P.S.  Here's a photo of Jennifer Hilton Sampson and me from yesterday -- by the time I remembered to take our picture, Roger was gone.  Oh well, 2 more interesting people he'll have to meet another day...
Posted by Paige McDaniel at 8:32 AM No comments:

Tips on Blogging from a Non-Expert. Really, I mean that, people.

It is day 2 of the Dallas ice storm.  What am I doing?  Well, I tried to learn how to edit video on Flip Share (unsuccessfully -- thank God for Natalie Farr), talked to my mom numerous times (she is planning a party, so lots to discuss), worked remotely on the CPD computers (hear that, Community Partners of Dallas’ Board Members – I am always working!), built a fire (somewhat successfully – the wood is pretty wet), and am starting to think about lunch.  But Wednesday is my normal blogging day, so I am sitting at the computer, writing.
Blogging is an interesting activity.  Have something to say?  Put it out there!  Is it controversial?  Think about it first, then decide how you would feel if they quoted it on the front page of The Dallas Morning News, then do it if you feel strongly about it!  Can you pass along interesting content that people would like to read?  If so, do it (and by the way, you won’t know if people want to read it until you do it – but you’ll find out quickly enough – your blog site will tell you how many views you get for each post)!
What can your blog be about?  You can choose to blog about an activity that you enjoy:  One of my friends (the wonderful Katie Mears) started a wonderful blog this year called “Is There Any Wine Left” (www.IsThereAnyWineLeft.com) and it is all about recipes she loves.  Or you can just start writing about whatever you want to write about, more like mine.
My blog (http://blog.paigemcdaniel.org/) has been a lot of fun for me and you are actually reading this (Thanks, BTW!), so it is helping me to get the word out about CPD, as well as about other things that I enjoy.  I never would have started my blog without encouragement from others – CPD's Program Director, Sarah Thomsen; one of our former college interns, Brian Wellman; the Development VP at Hope Cottage, Leslie White Clay; and Brad Mays, a friend from HPUMC.  Also, I learned some basics from a Social Media seminar put on by Kim Whitman’s Rsvp Soiree that featured Mike Merrill.  Many thanks to all of you for your help and advice.
So, allow me to be your encourager if you are thinking about starting a blog.  Do it!  And if you need some advice about blogging from a relative novice, feel free to call me at 214-624-7557.  But not today, I’m at home – it’s a snow day.
P.S.  When I wrote the first paragraph of this blog, I had no idea about what would come out.  So, call for advice at your own risk.  Fair warning!  Stay Warm!
Posted by Paige McDaniel at 10:13 AM 2 comments: