8 Toasts for the New Year

Normally I base my blog posts on what has impacted me that week -- what caused me to think, what touched my heart, etc.  I write it up, pass it along to you, and hope that it impacts you in a similar way.
This week is a departure from my formula.  Here’s what I want to read about right now and I that hope you do too…
2011 New Year’s Toasts
I have spent the last 35+ years ringing in the New Year with Joe.  Sometimes just us, but mostly with other friends.  We don’t usually make toasts, but this year, why not?  Toasts can be funny, inspirational, short, long, or just sweet.
Here’s a few I may make on Friday night:
1.        Here’s to the days of good will, cold weather, and warm hearts. (www.spritzels.com)
2.       A New Year’s toast to love and laughter and happily ever after. (www.spritzels.com)
3.       Stir the eggnog, lift the toddy, Happy New Year, everybody! (Phyllis McGinley)
4.       Youth is when you’re allowed to stay up late on New Year’s Eve.  Middle age is when you’re forced to. (Bill Vaughn)  To bed!
5.       Here’s a toast to the future, a toast to the past, and a toast to our friends, far and near.  May the future be pleasant; the past a bright dream; may our friends remain faithful and dear. (Anonymous)
6.       In the New Year, may your right hand always be stretched out in friendship, but never in want. (Traditional Irish Toast)
7.       New Year’s Day…  Now is the accepted time to make your regular annual good resolutions.  Next week you can begin paving hell with them as usual. (Mark Twain)  Cheers!
8.       To peace and prosperity, to love and laughter, to friendships old and new, to 2011!  May it be our best year yet!  (Paige McDaniel)
Happy New Year to each of you.  God bless us every one! (Charles Dickens)
Posted by Paige McDaniel at 7:31 AM No comments:

We Ask of You Just One Thing

I am the opposite of a football player.  I am mostly sedentary.  I shop for exercise.  Cooking is another hobby of mine, but really not much action there unless you count a rare short run to take cookies out of the oven before they burn.  Other than work, my most time consuming activity is watching TV.  I don’t really watch sports either, except my niece Lina’s basketball games (Go Lady Scots!) and I really do love the Mavs.
So, I find it kinda funny that I would be inspired by this quote:
We Ask of You Just One Thing…  All You Have.
I saw it on the wall of a football locker room on some TV show – I think either Glee (no surprise there) or maybe it was in The Blind Side.  I can totally see how football coaches would love this quote.  I tried to find the author by Google-ing it and the first search found was from the movie, Fight Club.  Tyler Durden did not say it, nor really anything like it much, but you know how Google is.  Fight Club is one of my favorite movies though, so maybe this makes a little sense in the weird world of blogging and quotation seeking, but no matter.  I just like the quote.
The quote reminds me of CPS caseworkers.  The young women and men (mostly women) who work for CPS in Dallas County do and do and do and are rarely thanked for their efforts.  If they do a good job and show that they can handle a large caseload they are given additional cases.  Caseworkers will be working tonight and tomorrow and on Christmas day.  They'll witness things we can't imagine and knock on doors Dog the Bounty Hunter would run away from.
Dallas County Caseworkers really give it all they have.
And children in Dallas are safer tonight because they do.
Posted by Paige McDaniel at 1:53 PM No comments:

I have a new love for the number 7.  Here’s why:
At Community Partners of Dallas we do a HUGE toy drive every year to provide toys for all of the children involved with CPS.  Truly, many of these children have never before received a gift.  These kids have been told by those who are supposed to love them that they are stupid and worthless and ugly.  They have been beaten, neglected, sexually abused, and worse.  Holiday gifts simply aren’t part of these children’s reality.  At CPD we want to change that.  CPS Caseworkers find out what the children want and we print wishes (just like an angel tree) and send them out to donor groups and individuals to fill them and get them back to our warehouse for the big Distribution Day (this year it is today, Wednesday, December 15, 2010).
On Wednesday of last week, 3 days before our deadline to return gifts and wishes, we had 77 wishes returned (unfilled) by one of our donor groups.  I know that 77 kids isn’t very many in the grand scheme of things – this is less than 2% of the total amount of kids that we will provide toys for and even the 77 kids who had their wishes returned will still get something from our drive – just maybe not what they especially wanted.  And that is the problem.
For a kid who has been told he doesn’t matter, for a kid who has had her hopes dashed over and over again by adults, one single wish granted means something.  It means that someone in the world listened.  It means that someone in the world cared.  It means hope.
So, for those 77 kids, we went into overdrive.  You may have seen our posts on Facebook asking for people to take the 77 and fill them.  You did.  I did.  My mom did.  My best friend did.  My friend in California who I haven’t seen in 10 years did.  Within 5 hours, they were all filled and even more people were calling and were willing to give money to help us help our kids who never had wishes printed.  Kids who were picked up by CPS today or last week or even last month, since the wishes were collected and printed in October.
We filled the 77.  Or so I thought.
This past Saturday was the deadline for donors to bring wishes and undesignated toys to our Toy Drive Warehouse at Peacock Alley in Oak Cliff.  We had tons of volunteers there to receive and sort wishes.  Joanna Clarke, our Development VP, was standing at the warehouse dock door greeting people, bringing in loads of toys and more.  A lady that Joanna didn’t know walked in and said “If I could give you a bunch of new bikes today, would you accept them?”  Joanna asked the lady if this was a trick question and (of course) quickly said yes.  The lady made a call on her cell phone and asked Joanna what the Peacock Alley Warehouse address was, hung up and asked if she could volunteer until the bikes arrived.  Joanna set the lady up with a toy sorting job and they continued to talk.  Turns out that the lady and her father started buying bikes and donating them to a charity every Christmas when the lady was a little girl.  They started with just a bike or two and as the years went by, the number of bikes grew.  This year, the large charity who had always been the recipient of their bike donation had turned them away.  The lady had tried a couple of other well-known charitable toy drive groups and had been told that they had no room to accept her donation.  So, the lady was just driving around in her car not knowing where to go or what to do next with her bikes.  The lady didn’t even know where she was driving – she said she all-of-a-sudden found herself in an unfamiliar area, but then she saw our small little sign that said “Toy Drive” with an arrow pointing her to us.
Guess how many bikes the lady and her family delivered?  77.
When Joanna called to tell me this story on Saturday afternoon and she told me the number of bikes, I got chills.  I explained to Joanna that 77 was the number of wishes returned unfilled earlier in the week that we had filled through our Facebook friends.
77.  It was a message.  You see, I know enough about the bible to know that the number 7 is thought to be one of God’s most important numbers.  Some call it God’s divine number.
You remember that I thought that WE (me, you, and every person who donated) had filled the 77 returned wishes and all the rest of the gifts for 5,000 kids?  By sending the 77 bikes God gently reminded me that He was the one who sent the bikes and filled the wishes.
That’s our Christmas miracle.  Thank you for being part of it.
Posted by Paige McDaniel at 2:38 PM 5 comments:

Not Advice From Your Mom -- 10 Tips for Young Women

If you know me, you probably know that I like to give advice.
So does my mom.  Even when you don’t want to hear it and she’s told you that a hundred times and I am an adult, and yes, I know you think I don’t wear enough blush, and
I digress.
As you might imagine, as the President and CEO of a small non-profit agency, I have lots of young women as co-workers.  At Community Partners of Dallas, we have 11 employees and numerous college and high school interns throughout the year.  These women are some of the best and brightest in the world and I’d put them up against any other team in town – they’d win in talent, creativity, work ethic, congeniality, trustworthiness, and beauty.
CPD’s women don’t need a lot of advice.  I still give it.  I’m going to give some to you too.  Take it or leave it.
1.        Believe in something.
2.       Family comes before work.
3.       Really think before you get that tattoo and/or tongue piercing.
4.       Get a college degree.
5.       When you start working, do everything you can to make your boss’ life easier.
6.       Read for pleasure.
7.       Read the newspaper.
8.       Join the Junior League of Dallas or your local woman’s volunteer organization.
9.       When you move to a new apartment or home, invite all your neighbors over for a drop-by party.  I always did a breakfast on a Saturday from 8:30 until 10:30.  It is a cheap party without liquor.  Coffee from Starbucks, breakfast casseroles, donut holes, and OJ with cute paper plates and napkins.  You’ll be surprised how much this will help you connect.
10.   Smile and laugh.  A lot.
Advice is cheap.  Take it or leave it.
P.S.  I’d love your advice too, so comment.  Mom is on advice-break for the holiday.
Posted by Paige McDaniel at 8:32 AM 4 comments:

I wake up tired.  I go to bed tired.  This is the time of year where things just start snowballing and I can't ever seem to catch up.

Community Partners of Dallas is in high gear in every way in December -- annual reviews for staff, end of year fundraising, the toy drive for 5,000 kids, and more.  Personal time seems to take a back seat, but it cannot.  Family and friends must have gifts, the house must be decorated, there are parties to attend and host...

Luckily, I am privileged to work with the best women in town.  The staff at Community Partners of Dallas keeps coming to work every day with smiles on their faces, energy in their step, and love in their hearts.

I give three cheers for these wonderful women:  Ann, Angela, Greer, Sarah, Natalie Lee, Natalie Farr, Pam, Marjorie, Vanessa, and Joanna.  Because of these ladies, children are safe and protected, and they'll have a holiday gift under the tree -- no matter where they lay down their heads on Christmas Eve. These women keep me coming to work.  And even if I'm tired, they make me smile. 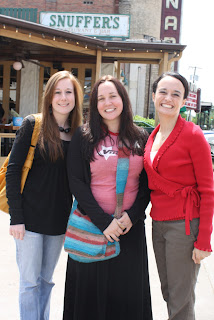 Posted by Paige McDaniel at 9:08 AM No comments: