I'm answering the Hodgepodge again this week.  Hope you'll give me some suggestions for several of my dilemmas!

1. It's hard to believe, but next week's Hodgepodge will find us in the month of September. What's one thing you want, need, or hope to do still before summer officially ends?
I usually take a day each summer (usually in July) and clean out my office at Community Partners of Dallas.  I hate to admit it, but I think I may have skipped a couple of summers lately... 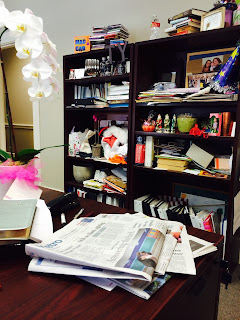 Anyway, I would love to get this done, but I doubt I will.
2. When were you last at 'your wit's end'?
Week before last.
3. Describe a time you were figuratively thrown into 'the deep end'?
I was in charge of decorating a big building for Christmas once.  Believe me, decorators should be paid like kings for doing that work.

On a related note, I just hired someone to decorate my house for Christmas this year.  It will be the first time that I haven't done it myself.  I cannot wait to see how it looks! 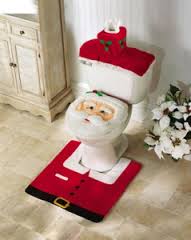 4. Does the end always, ever, or never justify the means? Explain.
The end sometimes justifies the means.

I would never again do one bit of exercise if I didn't think it was going to help me get healthier.

Did I say never?  I meant NEVER.
5. What makes your hair stand on end?
I don't think classrooms have them anymore, the squeak of chalk/nails on the chalkboard still gets me. 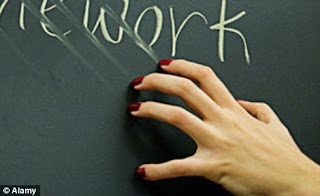 I'm grossing out right now just thinking about it.
6. I read an article on the website Eat This! Health, that listed 11 foods we can eat to help end bad moods. Basically it's a feed your brain so you're less anxious, grouchy and lethargic. The foods are-mussels, swiss chard, blue potatoes, grass fed beef, dark chocolate, greek yogurt, asparagus, honey, cherry tomatoes, eggs, and coconut. Which of those do you think would most help end your own bad mood? Which do you fear, if forced to eat, would put you into a bad mood?
I actually like all of these things, so it's hard to pick just one.  Probably mussels in a buttery wine sauce with saffron and pomme frites on the side would be my first choice.  I love asparagus too and we could use the egg to make hollandaise.  Guess I know what's for dinner.  Yum!

I don't think any food could put me in a bad mood if I wasn't already in one to start with.  Not saying that I like all foods -- I hate cilantro -- but it wouldn't put me in a bad mood if I had to eat it.
7. What project around your home, office, or life in general feels like there is 'no end in sight'?
This is not a project, but I absolutely hate putting on mascara every day.  I even dreamed about it the other night -- that I had to keep applying and applying, but no mascara was getting attached to my lashes.  Of course, the mascara did go everywhere else on my face.  I may need an interpreter for this one. 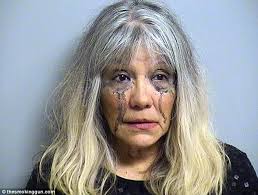 8.  Insert your own random thought here.

I started back up exercising (walking) today and decided to take the advice of my friend Joanna and get a book on tape to listen to while walking.  How do you know what audible books are good?  I read so much that I have already read a lot of the popular ones.  Anyway, I ended up getting a book I never even heard of called Beautiful Ruins by Jess Walter. 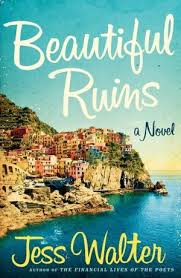 I've only listened to about 20 minutes of it, but I think it may be good.  I'm looking for suggestions on the next one, so fire away friends.
Posted by Paige McDaniel at 2:00 PM