A Smile as Big as Texas

I saw a smile as big as Texas last night.  It was on a little 3-year-old boy’s face named Ernest.  Ernest and his family were with me last night at GattiTown, along with a whole bunch of other kids, their families, and CPS caseworkers.  Here’s the story:

I have worked for Community Partners of Dallas for almost 10 years and in that time I have come to know LOTS of CPS caseworkers.  Most CPS caseworkers don’t stay with CPS – in fact they used to tell me that 60% of new caseworkers left before they even completed 6 months on the job.  It’s tough work and those who do stay for a few years often get moved up into supervisory roles.
Note:  Not all caseworkers want to move into supervisory roles – I’ve talked to some who moved up and then came back to casework because of the huge amounts of paperwork and the added stress. While a single caseworker may have 25-50 cases at a time, a supervisor has 8 caseworkers under them – all with 20-50 cases.  Holding that many young lives in your hands is terrifying.
Anyway, I tell you this to let you know that when a supervisor calls me and wants to meet with me about something – and the call is from someone I have known for years as both a caseworker and supervisor – I get interested immediately.  I mean, if I’ve known this person since I’ve been working with CPS, they are good.  They’ve stuck it out.  They know what they are talking about.
So a few months ago my friend Bobby, a CPS supervisor, called me and asked to have a meeting.  With him, he brought a well thought out written proposal (my little grant-writer’s heart fluttered).  Bobby and his team wanted to celebrate some successful families – those with whom they had worked and who had come out on the other side, better than before.  Families who had their lives turned upside down with an investigation of child abuse, but who had worked with their caseworker, gone to parenting classes,  and had proven that they could be successful parents.  Some were families where the children had been permanently removed from their birth parents and placed with loving relatives.  Successful families.
So instead of focusing on what most people think of when they think about CPS – tearing families apart – this event would be celebrating families who were a success.
Bobby brought us this great idea and it was one that our board at CPD loved.  And luckily for us, one of our board members is the owner of GattiTown, Mr. Paul Griffiths.  When I asked Paul and his wife Aimee if they would be willing to host this event, they said yes immediately.  What a HUGE gift they gave to us and to those families last night!  After a little presentation for each family, the pizza bar was opened and the games and rides were free to our guests.
Our Development VP, Joanna Clarke, and I just stood in the middle of the midway room watching the kids run around with tons of prize tickets, parents interacting with their kids and enjoying themselves, and even caseworkers running into each other in the bumper cars and laughing hysterically.  Joanna and Ernest even got me to ride the Frog Hopper ride – and I screamed more than any of the kids.
Toward the end of the night, Paul and I were standing in the midway, just taking it all in, and Bobby came over to once again thank us.  Bobby explained that one of the families in particular lived at a very low socio-economic level and they just would never have been able to have a night like this – not in their wildest dreams.
A wildest dream and a smile as big as Texas.  What a night. 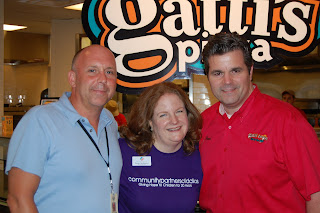 Posted by Paige McDaniel at 9:22 AM