Is My Charitable Giving Normal? 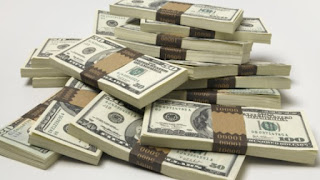 As usual, I wasn't sure what I was going to write about this morning, but I got to work and started thinking about charitable giving and why people do it.

Why do we give?

I'm sure that people have different reasons for personal giving,  At the very least, it makes us feel good to give.

But I think that the main reason is that we are Americans.

For Americans, giving is part of our culture -- more than in any other country in the world.  I do believe that many Americans were indoctrinated by our families and teachers (or at least I was) to believe that we are so lucky and blessed to live in this country and that, in turn, it is our duty to help others.  The old "for whom much is given, much is required" deal.  I believe it and if you are lucky enough to live here and have enough time to read this blog post on a smart phone, tablet, or computer, I bet you believe it too.

How do we give?

The June 29th edition of Giving USA was able to answer this question (and a bunch of the stats) for me.

Yes, it is great news, but there are some changes in giving to be noted.  Let's break it down...

Who is giving?
I don't even have to do any research to know that these numbers are about the same -- the percentages have been similar since I started working in the non-profit field more than 18 years ago.  We see close to these same percentages here at Community Partners of Dallas as well.

To what do we give?

Here is the list of the types of organizations that Americans like to support in order from the most funding to the least:
This is the part that is changing.

International Affairs is down, but that may be because we didn't have a huge international disaster last year that moved people to give.  But also Americans like to give in our own communities.  I certainly do -- send those funds on over to CPD, people!

Human Services is going up -- YAY, as this is the category for Community Partners of Dallas -- keep this trend going for our kiddos, please!

The Religion category is also changing.  Even though Religion experienced a new high in 2014, it continues a "dramatic 30-year downward slide as a share of total giving" -- it dropped from 53% of all donations in 1987 to just 32% of the total in 2014.

Of course we know that this makes sense.  Boomers started the trend away from organized religion and their children are following suit.

It makes sense, but personally, I think this is sad.  The best times I ever had while growing up were at church.  Most of my best junior high and high school girlfriends went to church together and we learned so much about right and wrong in church.  Today, my church is still a place for fun and friends, but it is mostly a place of inspiration and faith.  And yes, I do give financially to my church, as well as volunteer.

Funny.  Do you know who I quoted at the beginning of this article -- the old quote "to whom much is given, much is required"?  You might think it was George Washington, John Kennedy, or Martin Luther King.

How do you give and why?