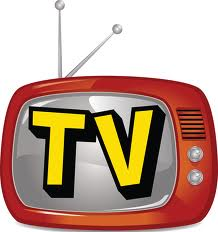 If you are a regular reader of this blog, you know that I love TV.

My grandmother lived with my family most of my life and she loved TV.  Dandoo (I named her and my niece Lina -- my 2 claims to fame.) and I watched together and I even had my own TV in my bedroom when I was 11 -- she gave it to me.

NOTE:  Now, I know you parents are all thinking that was horrible.  Bite me.

So, I have many fond memories of TV and I will admit that it is my crutch -- pretty much when I'm at home, alone, and awake -- my TV is on.

NOTE:  Now, I do read books and work from home sometimes, so the TV is not on then.  At least most of the time it's not...

The thing that has changed semi-recently is the DVR.  Kids, in the olden days, we had to watch commercials -- or least you had to leave the commercials on.

NOTE:  Mute buttons were not invented way back then -- in fact we even had to get up and walk over to the TV to change the channel and since there were only about 4 stations, you looked at a thing called the TV Guide and decided what you were going to watch each hour and tuned in.  Truly, I don't know what men did without remotes to channel surf.  Lit a new cigarette and/or poured another scotch, I guess.

But now, I don't watch commercials much since I DVR my favorite shows and watch them later so I can fast-forward through the ads.  I know that all of us do this now.  Like me, I'm sure that even if your favorite show is on right then while you've parked your butt in the La-Z-Boy, you might watch something you have saved in the box, then watch your preferred show later so you can skip the commericals.

NOTE:  The girls here at CPD know that I really love a show when I tell them that "I watched that show live."  This means commitment, people.

So now, I pretty much only see commericals during The Today Show.  So, take this favorites list with that in mind:

1.  The AT&T Commercials with the guy in a suit sitting around the little kid table asking the kids about how fast something is, etc.  The whole series is pretty cute, but I think I burst the bubble of my co-worker Corinne when I told her that I know it is scripted.  One of the little boys mouths the words of one of the girls when she speaks.

I am, at heart, a critic.  Sorry, but that bubble had to be burst.  Still like the series though.  Here's the link for the "Infinity" one.  Watch the boy's mouth when the little girl says "infinity times infinity" -- sorry, but you needed to know the truth.  The "Dizzy" one is probably my favorite, though.

2.  As for more cerebral (Can that word even be used when we're talking about commercials?) ads, I like the Prudential one with the bald guy saying "We asked people to tell us about the oldest person they've known" and they have a huge chart with dots all in the later years of age like the 80's to 100's.  The point is that we're living longer, so we need to plan for retirement.  It hasn't made me add anything more to my Roth IRA, but I still think it's pretty good.

This is a longer version:  http://www.youtube.com/watch?v=C3qj88J7-jA

3.  But my favorite of all is from Carters.  It's narrated by a little girl voice (And yes, I know it's an adult who sounds like a little girl -- critic, remember?) and starts with "I was born on a cold September Sunday" and goes through the life of the child.  The thing I love most is near the end -- something like "Because the moment I became yours, you became mine."

I just love that line and I had never thought about it before.  I think as parents, we think that our kids are ours -- almost like property.  Sometimes I think this is partially why child abuse happens -- the whole attitude of "that's MY kid and I can do anything I want with them/to them".

But this line in this commercial flipped it -- and I love it.  That line makes me cry every time.

That kid is yours, but YOU are also his.

Remember that.  It's sacred.

Posted by Paige McDaniel at 9:44 AM