Will Lucy Make Ricky Lose His Temper Before Her Hat Is Delivered?

I woke up too early the other morning and turned on the TV.  It was in the middle of an I Love Lucy episode, so I just started watching.

I love I Love Lucy.  When I was young I watched it everyday after school (Holla for Slam Bang Theater!) and I have seen every episode about a million times.  So, when it came on the other morning, I knew just what had happened in the episode.

We join Lucy and Ethel at the hat store.  Lucy has found a precious turquoise hat with little pearls on it.  Ethel warns Lucy to put it back and walk away, and she tries, but that hat is just too much for her.  She tells the hat store woman (who plays many parts at differing times on the show -- you'd know her if you saw her) to charge and send it tomorrow.  Lucy now has 24 hours to make Ricky lose his temper.

NOTE:  The back story you missed (but I'm sure you remember) is that Ricky and Lucy bet that he could hold his temper longer than she could refrain from buying a hat.  Don't you have this bet with your husband all the time?

Next we find Lucy in bed waiting up for Ricky to come home from the club.  Oh, it was a hard night for Ricky and he had to run the numbers with the band until 3 or 4 am, so he is dog tired.  Ricky hops in his twin bed and goes right to sleep.  Lucy then goes into action:  turns up the radio, files her nails, eats crackers, spills the crackers all in Ricky's bed, cracks pecans, even nails his slippers to the floor.  She finishes off with Ethel arriving with the dribble glass that she fills with tomato juice and dribbles all down his white tux jacket (he was supposed to take publicity shots that morning, thus the white ensemble).  Ricky holds his temper. 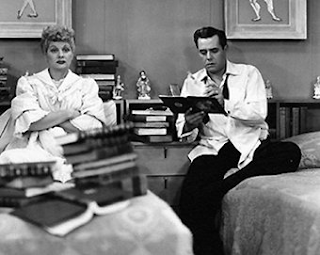 It is not until he gets a call from some agent trying to book a ventriloquist (Does anyone miss ventriloquists?  Really?) and is able to hold his temper and gets the guy at a rock bottom price that Ricky realizes that Lucy helped him and he calls off the bet and tells her she can buy any hat she wants.  After a quick faked call to the store to supposedly "order" the turquoise hat with the pearls, Lucy hangs up the phone and the doorbell rings with the hat delivery.  Ha, Ha!

If only it was this easy to teach someone how to hold their temper.

The kids we help every day at Community Partners of Dallas live lives of terror waiting for the next shoe to drop.  For dad to have a bad day at work and start yelling and drinking and worse.  For mom to scream "I hate you and I wish you'd never been born" because her boyfriend decides to go out with his buddies because boyfriend is sick of being around kids for 2 hours.

A turquoise hat is not a big deal in the grand scheme of things.  A child is.

Let's be Ricky and count to 10 before we react today.  Ricky did it in Spanish, but I'll let you choose your language.  Spanish would be fun, though.
Posted by Paige McDaniel at 8:36 AM