I JUST SET OFF THE FIRE ALARM!

Yes, I did.  It was in the lobby of Community Partners of Dallas.  Why did I do this, you might ask?  Let's go back to the beginning...

NOTE:  The beginning was about 30 minutes ago, so we're not talking the olden days or anything.  "Ain't nobody got time for that" -- as Sweet Brown would say.

I had made my morning coffee -- using my blessed Keurig -- and was just walking back to my office to start the day, when I heard my office phone ringing from the hall.  It was my friend Jill (she was stuck in traffic).  She wanted to know how Traces was at the Winspear last night since she and her crew are going tonight.

NOTE:  Go and see Traces -- it is part of the AT&T Broadway series at the Winspear and just opened last night.  It is a grittier Cirque du Soleil type performance and it was great.  Bonus:  90 Minutes.  No Intermission.  This always get a Woo Hoo from my crowd!

Anyway, as we're talking Jill tells me that she got a message from one of her friends (who also works with us at CPD) and that she had woken up with pink eye this morning.  I tell Jill that she hasn't called in, but then I look and the red message light is on, so I know that is probably what my message is about.

Jill and I finish the conversation and I listen to the message and yes, Ann woke up with pink eye and is on her way to the doctor, then will come in, but she won't touch anything.

I then send an email to the staff letting them know Ann's status and end the email with "Wipe down your stuff."

Since I don't tell the staff to do anything that I wouldn't do myself (this is mostly true -- hey, I put in my time, people -- I've even plunged toilets), I got out my package of Clorox Wipes (keep my own under my desk at all times) and started wiping down places where I know Ann might have touched yesterday.

This gets me to the lobby with the wipes and Lauren and I are both going over stuff.  I am rubbing the door knobs, the door locks, the alarm pad, etc., and while I'm at the alarm pad, I see the fire alarm thing.  You know -- this: 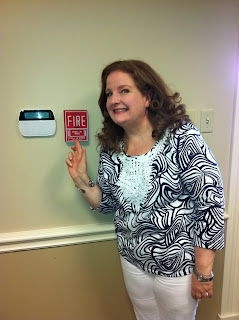 Now I know that Ann had not touched the fire alarm, but it looked dusty, so I just quickly decided to give it a quick wipe down and that was all she wrote.

Luckily, we are blessed to be part of The Meadows Foundation's Wilson Block, so lickety split a super cute Dallas police officer was here and stayed with us until the Meadows maintenance staff got here to shut the thing down.  The alarm probably only screamed for 10 minutes, but it felt like a lifetime.

And to add insult to injury, we had a group of volunteers arrive (early) while the thing was blaring, so while Vanessa ran to keep them outside (in the 90+ degree heat), I had to go out and explain to them that I was the idiot who set it off and that they didn't need to be scared.

NOTE:  You may be surprised to know that volunteers don't exactly relish the idea of entering a building with a huge-ass fire alarm blaring and a police car outside.

So, what did I learn from this?
And Ann needs to stay away from people with pink eye.
Posted by Paige McDaniel at 9:01 AM