An Out of Shape Old Lady's View of Sports in America

Hey, everyone -- it's Chick Lit Luncheon week, so I'm late in posting the blog this week.

NOTE:  If you aren't attending the Chick Lit Luncheon benefiting Community Partners of Dallas tomorrow, you're WAY too late -- we are completely sold out.  What fun! 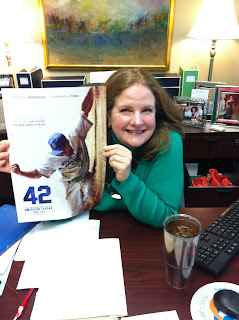 A couple of weeks ago, I was lucky enough to have been able to attend a USA Film Festival screening of 42 the life story of Jackie Robinson and his history-making signing with the Brooklyn Dodgers under the guidance of team executive Branch Rickey.  The film stars Chadwick Boseman as Robinson and Harrison Ford as Rickey and they are both marvelous.

I really don't follow sports except the Mavs and honestly, if the Mavs aren't winning, I'm not watching and sometimes not even then -- check out my previous blog post about my ability to control the wins here:  http://blog.paigemcdaniel.org/2011/05/controlling-mavs.html

Of all spectator sports, I'd say baseball is my least favorite (other than golf -- super boring).  It just moves too slowly for me (although hockey moves too fast for me -- I can never follow the puck), so while I had heard of Jackie Robinson and knew he was the first black major league player prior to seeing 42, that was about it.

The film was a real wake up call for me and I saw true guts and what it is really like to turn the other cheek when confronted with extreme prejudice.  Both Jackie Robinson and Branch Rickey (who Chadwick Boseman told us was nick-named "The Mahatma" -- yes, Chadwick attended the screening and spoke to us in Q&A after -- I know you're jealous -- don't hate!) faced the most horrific bigotry, but they knew that non-violence was the answer to integrating the major league.

It is a film every kid, teen, and adult needs to see.

It is interesting to me that Mark Cuban even says he would consider Baylor's star woman player Brittney Griner to try out for the Mavs.

I wonder what Jackie and Branch would think about that.